So the Mallorca trip turned out to be a bit different from our other ventures. It was the usual crowd of Joe, Chris, Tom and me. This time we were shacked up in a great apartment set right in the heart of Valdemossa, one of Mallorca’s top tourist destinations. The fact the we overlooked both the valley and the monastery meant we were in A1 numer0 uno spot!!!

Our flat in the Monastery Square

Sat above a gift shop in Placa Cartoixa and with a handy restaurant as well, it’s perfect. Valldemossa itself is a proper tourist attraction with Chopins Monastery and picture postcard streets and cafes. It does though get really busy during the day. But once the visitors mount up in their coaches and leave, things settle down and Valldemossa transforms into a peaceful mountain town. The perfect base for a climbing trip where chilling out after a full day on the rock becomes de rigueur. 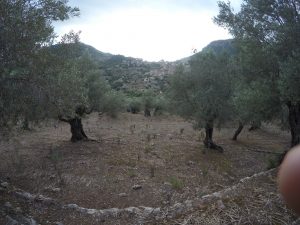 Valldemossa through the Olive Groves

Our apartment was called Duplex Sara and had three rooms with two sets of twin beds and a double, as well as a fold down in the front room (this was pretty manky though). We got the feeling that it was new on the market and needed some work to sort the teething problems, but as a whole it was really good, if a bit pricey. Strange that the old room which doubled as a dining room was the one we used almost exclusively. This faced out into the square and despite the uncomfortable dining chairs was our chill out area. Probably because it was next to the kitchen, source of all good things such as home made risotto, paella and curry…. and also rum and coke, which at 5 euros for a 75cl bottle and 6 cans of coke was a bargain Chris and I made the most of :-).

Cards saw us while away a few evenings and a couple of meals out at a local Pizza restaurant meant we sampled some local(ish) cuisine, although the closest I actually came was tapas on the south coast with Chris, where we had potatoes, olives and calamares with tons of garlic. Nice but smelly.